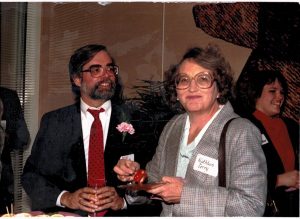 Warren and Kay in the early 80’s

We should all note and be saddened by the death of Kay Terry, who was a “godmother” to Schwegman, Lundberg & Woessner from our start in 1993, when she was a head of life science patenting and licensing in the Tech Transfer Office at the University of Minnesota. She had held that position since at least 1984, when we took the BarBri course to prepare for the Minnesota Bar Exam. (I had to sit for the MN Bar Exam since I had not been in practice in NYC long enough to waive in.)

It was a good time to build a practice around patenting inventions originating a universities and non-profit institutions, since they were all scrambling to set up tech transfer offices after the passage of the Bayh-Dole Act in 1980, which permitted universities that originated inventions with Government funding to elect title if they filed for patent protection. She would tell me, “I come across like a naïve little old lady, but the licensees end up facing a negotiator who drives a hard bargain.”

I also met Tony Strauss at the bar review course and he became head of electrical/materials science patents and licensing in the Tech Transfer Office. I was an associate at Merchant & Gould then, but Kay and I became friends. She and Tony both started sending me invention disclosures. When I finished writing and filing one application, they would each send me another disclosure, so the University began to grow as a client. One of the early filing was for a Lyme disease vaccine which I believe is the shot you use to protect your dog. We also patented the use of ribose solutions post-cardiac surgery, which led to the formation of Bioenergy. If the technology was over my head, she would say, “I’ll teach you as much as you need to know,” and she did.

The University of Minnesota was one of the anchor clients I brought when Steve Lundberg, Mike Schwegman, Dan Kluth and I founded SLW. Kay and Tony transferred all their files to us. The landmark of Kay and my legal careers was patenting and licensing a genus of anti-HIV drugs in 1988, one of which was approved by the FDA in 1996, after it was licensed to Glaxo by Kay. The primary patents in survived litigation against Glaxo and eventually yielded about $750 million in royalties to the University of Minnesota. The drug, Ziagen© is still on the market.

Professionally, Kay was well-known and well-regarded. She signed up the University of Minnesota as an early member of the Association of University Technology Management (AUTM) and was also on the Board of Directors of AIPLA, so we went to a lot of meetings together. She got me speaking gigs on topics at both organizations that I really had to study for, such as transgenic plants (GMOs) and animals (the “Harvard Mouse” and “Dolly”). Kay became Director of the Tech Transfer Office at SUNY-Buffalo, and ended her IP law career of counsel at SLW, before she left and worked as a consultant for local clients.

I did not see or visit Kay as much as I should have after she retired. I tried to refer some clients to her but she seemed content to be retired and enjoy family life. She was preceded in death by, and was the last one of, nine siblings (!). The last thing she said to me was, “We had a good run,” and we certainly did.

(Ed’s. Note: Photo is from the early 80’s. Kay died on April 19th, but the obit did not appear until last Sunday.)

This entry was posted in People, Uncategorized. Bookmark the permalink.