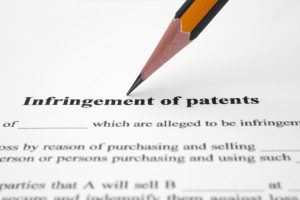 Section 271(f)(2) reads:
“Whoever without authority supplies…in or from the [US] any  component of a patented invention that is especially made…for use in the invention and not a staple article of commerce….where stccg component is uncombined in whole or in part, knowing that such component is so made of adapted and intending that such component will be combined outside of the [US] in a manner that would infringe the patent if such combination occurred within the [US], shall be liable as an infringer.”

Patent owners who prove infringement under s. 271 are entitled to relief under s. 284. Section 284 reads:
“Upon finding for the claimant, the court shall award the claimant damages adequate to compensate for the infringement, but in no event less than a reasonable royalty for the use made of the invention by the infringer….”

In WesternGeco LLC v. Ion Geophysical Corp., No. 16-1011 (June 22, 2018), the Supreme Court decided that patent owner WesternGeco (“WG”) was entitled to profits lost outside of the US due to Ion’s infringement under 271(f)(2). Ion had sent components of WG’s patented “system,” that allowed improved mapping of the ocean floor, abroad where they were assembled into the system by a third party that competed for business with WG–presumably by undercutting WG’s price.

The counterargument, embraced by a dissent by Goresuch and Breyer, was that allowing recovery of lost profits overseas amounted to a de facto impermissible extraterritorial extension of the monopoly created by a US patent. The majority argued that they were simply crafting an appropriate remedy for Ion’s infringing acts, that took place in the US.

The problem that the minority had with this approach is that the recovered damages were based on the profits that WG would have realized if it had no competition abroad, not the profits attained by the companies that could lawfully compete with WG once they assembled WG’s system.

The majority had to deal with the presumption that federal statutes apply only within the territorial jurisdiction of the US.

They concluded that the conduct relevant to the “focus” of s. 271 occurred in the US. Therefore, the case “involves a permissible domestic application” of the statute, even if other conduct occurred abroad.”

In other words, the Court unsurprisingly found that the infringement is the focus of the damages statute and that s. 271(2)(f) focuses on domestic conduct: “Thus, the lost profit damages that were awarded to WG were a domestic application of s. 282.”

Note that 271(2)(f) does not require that any activities occur abroad in order for liability to attach. Of course, if Ion sent the components abroad with knowledge and intent, but the third-party recipients never assembled the components and used the system to compete, Ion would still be guilty of infringement but there could only be token damages. The dissent would limit the damage award whether or not the components were assembled into the patented system.

The unasked question is not whether or not there was infringement, but were the damages “fair”? As the dissents complain, “WG seeks lost profits for uses of its invention beyond our borders. … In measuring its damages, WG assumes it could have charged monopoly rents abroad premised on a US patent that has no force there. Permitting damages of this sort would effectively allow US patent holders to use American courts to extend their monopolies to foreign markets.”

Me thinks that the dissent doth complain too much! Ion is being held liable for infringement due to specific acts it carried out in the US. If WG could charge monopoly prices abroad, it was not just because it could keep Ion from sending disassembled systems abroad. There was either no effective competition – because WG’s system was better than that used by competitors – or WG may own foreign patents rights in the countries where the third parties were assembling the systems, but WG decided that it was more cost-effective to sue in the US.

Of course, WG would be forced to sue abroad if a third party was sourcing the components abroad and assembling them abroad, but that discussion is beyond the scope of this note. I just note, as does the dissent, that a US patent does not protect its owner from competition beyond its borders but, as I have briefly discussed above, this case is not subject to such an easy analysis.

This entry was posted in Infringement. Bookmark the permalink.