Catch Up on the “Ripple Effect” of KSR at AIPLA 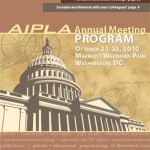 I will be speaking at the AIPLA Annual Meeting on October 21st at 9AM as part of a panel “KSR and the Ripple Effect: Examining the Broad and Increasing Impact of KSR on Patent Litigation and Practice.” The panel will be moderated by Donald Cameron and will include presenters on virtually every aspect of the decision and its aftermath, including the role of reexamination, appellate practice post-KSR, the effect of KSR on early-stage IP and specific take-aways from the decision itself, including the new role of obvious to try rejections and the appropriate (and inappropriate) use of hindsight and non-analogous art (my topic). Hope to see you in DC.

This entry was posted in Conferences and Classes and tagged AIPLA, patents, Warren Woessner. Bookmark the permalink.