Patents4Life is Six Years Old this Month. Happy Birthday to Us! 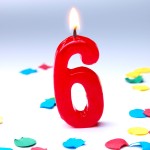 Six years ago, In re Kubin caused a flurry of concern among biotech practitioners, and a short article on this decision was the first post on Patents4Life. That was a pretty big “story” at the time but we all had no idea what was coming our way. It is difficult to think of an area of patent law that hasn’t been through a sea change since 2009, or at least has not encountered some very high seas.

There are not enough hours in today to do even a cursory review of the “State of Patent Law” since Patents4Life was started. Of course, one of the hottest topics right now is the scope of s. 101, and its breadth will surely be adjusted as the precedent piles up. And just consider, all of this debate is completely outside of the changes wrought in 35 USC by the AIA, the rise of generic biologicals that was set off by the ACA (“Obamacase”) and the Therasense, Teva v. Sandoz and Nautilus decisions.

Many of my colleagues feel that these are dark times for the patent system and, with looming legislation geared toward limiting the ability of NPE’s to enforce their patents, it can be hard to disagree. But I think that a number of developments over the past year, and a half-decade, have been — or will turn out to be — pro-patent.

If you are Amgen, you are not thrilled by the steadily increasing number of biosimilar applications filed at the FDA, but their time has come, and patent disputes will surely follow, as will lower costs to consumers. The en banc Therasense decision was intended to discourage the auto-filing of inequitable conduct charges, while providing guidelines to discourage the really “bad actors” and, by all accounts, is succeeding. Inter partes review has been called a “patent killer,” but it will probably encounter less criticism, more due process, and less use as s. 101 settles down. If Brulotte v Thys is overruled by the S. Ct. in Kimble v. Marvell, the mechanics licensing patents will be easier.

Of course there is more than a little room for improvement at the USPTO. The back-log of unexamined applications and cases awaiting BTPA review is staggering. (If your client has the money, I highly recommend “buying” Track 1 examination.) A lot of the discussion at the “Patent Law Experts Conference” in Naples, FL Feb. 7-9th, focused on proposals for reforming patent prosecution. I think that the best one was to eliminate “after final practice” – including final rejections, which are seldom final anyway, and RCE’s, which are often treated like simple continuations. Applicants could then continue negotiations with engaged Examiners until allowance or initiation of the appeal process with optimal claims and fewer issues to resolve. Commissioner Lee and helpers, start your engines.