Kumar v. Iancu – The Dangers of an Overstuffed Preamble/Note on 37 CFR Part 4.

Posted on November 9, 2018 by Warren Woessner 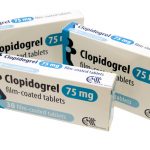 On November 7, 2018, the Fed. Cir. issued a summary affirmance of the PTAB’s interference decision of September 6, 2016, in Kumar v. Sung (Patent Interference 14/322,039) which found that the claims of U.S. Pat. No. 8,541,422 were obvious over a single prior art reference. Since the Senior Party had dropped out – its patent was found to be obvious as well – the PTO intervened as the defendant in Kumar’s appeal to the Fed. Cir.

The PTO Brief filed in the appeal is of interest due to the thoroughness of its reasoning that, basically, affirmed breaking the preamble into two “limitations”, one of which gave life to the claim as a method of treatment and one which was ignored as a statement of intended use. The main claim is directed to a method of treating thrombosis with S-oxo-clopidogrel, the active metabolite of clopidogrel (Plavix®). While it was known that S-oxo-clopidogrel was more potent in mice than clopidogrel, the ‘422 patent attempted to claim the use of the metabolite to treat patients that do not respond well to clopidogrel:

The Fed. Cir. adopted the reasoning of the PTO Solicitor’s Brief for Intervenor. While the Board construed “an effective amount” as an amount effective to treat or prevent thrombosis, thus giving preamble phrase [2] patentable weight, the Board did not give weight to either phrase [1], which seem to belong together, but dismissed them as a statement of intended use:

“The Board observed that claim 1 recites a single administration step, not ‘multiple steps, e.g., those of administering clopidogrel, observing the response and administering S-oxo-clopidogrel as an alternative’. The Board thus declined to read multiple steps into the body of the claim via the preamble”. The PTO stated that the Board construed the preamble [1] as doing “no more than defin[ing] a context in which the claimed administration step operates… Put another way, administering [the metabolite] does not act chemically in a patient to reduce or alleviate that patient’s earlier poor response to clopidogrel.”

This sounds more like a refusal by the Board and the Solicitor to believe that the metabolite is effective, but limiting the phrase “reducing or alleviating” to chemically counteracting a prior poor response to clopidogrel seems like an overly strict construction of phrase [1]. After all, if a patient responds poorly to a dose of clopidogrel, the claim simply seems to be directed to replacing clopidogrel with an effective treatment amount of its metabolite. In any case, why shouldn’t phrase [1}] be found to give “life and meaning” to the claim? The Solicitor relies on this reasoning again at Page 19 of the slip op., see fn. 19, but rejects Kumar’s cited case law without citing any authority in support of its position.

Later in the Brief, the Solicitor again agrees with the Board that “the preambles [sic. Preamble 1] just provide a context – a patient population- in which the claimed step of administering [the metabolite] to treat thrombosis or embolism operates.” The Board and the Solicitor note that the preambles do not recite the implied first step of administering clopidogrel but fail to mention that there must be a determination of poor or no response to the drug before the metabolite is given.

By now, you may be thinking that a lot of argumentation might have been avoided if the claim recited these two steps – after reconnecting the two [1] phrases. At least this would have mooted the need for the Solicitor to justify the Board’s giving “partial effect to the preambles of the involved claims of the ‘422 patent.” The Solicitor approved of the finding that preamble phrase 2, the treatment or prophylaxis or embolisms, gave effect to the claim’s single treatment step, but would not extract any other limitations from the preamble: “If Kumar had wanted claims limited by such steps, Kumar could have drafted claims expressly reciting those steps.”

The take-away here is that an attempt to broaden a claim by putting material elements into the preamble is risky business. Of course, sometimes even adding steps won’t save a method-of-treatment claim, particularly when the metabolic pathway of the drug is in the prior art. That was the case here, and the Solicitor successfully argued that the Board correctly found the claims to be obvious.

This post may seem a bit arcane but, believe me, it is nice to have a distraction for a few hours from the toxic campaign ads and rhetoric we have been slogging through. And just when I thought we were in the clear, at least for a while, President Trump’s Acting Attorney General Whitaker is reported by Law360 to have been a Principal in an invention promotion business “World Patent Marketing”, that was shut down and fined after the FTC brought suit. In case you have forgotten, 37 CFR Part 4 is entitled “Complaints Regarding Invention Promoters”. The PTO is tasked with providing a forum for inventors who believe they were exploited by such outfits. Complaints sent in by inventors and responses by the promoters are to be published on the USPTO website. There are no time limits.