“In Leukemia Treatment, Glimpses of the Future” of Medicine and IP 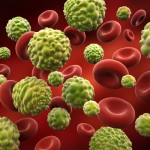 A provocative article in the Sunday New York Times recounted how a young cancer researcher, who was diagnosed with acute lymphoblastic leukemia (ALL), and who responded but relapsed twice after receiving chemotherapy and bone marrow transplant, achieved a third remission after his colleagues sequenced all of the RNA of a sample of his leukemic cells and all of the DNA in a normal tissue sample, in hope of finding a genetic mutation that would yield a treatable target.

The results of the DNA sequencing revealed some mutations, but none that could be targeted with known drugs, “[B]ut RNA sequencing revealed that a normal gene, FLT3, was overactive in his leukemia cells.” Overexpression of this gene, which encodes that FLT3 receptor, causes marrow cells to be a magnet for the FLT3 ligand (or “FL”), and “appeared to be driving the growth of his leukemia.” Dr. Wartman, the patient, was given sunitinib, a drug approved for the treatment of stomach and kidney cancer, and is in remission.

Although the story makes all this work sound sui generis, overactive FLT3 comprising various mutations was known to be associated with a subset of ALL patients, as well as in other patients, such as one third of AML patients, and other drugs were known to have at least some ability to  block  FLT3 receptors. See, D. Small et al., ASH Educ. Book, 1, 178 (Jan. 1, 2006). But what if all the work described in the story originated with the Washington University team? What could they patent under the Mayo/Myriad “rules”?

If this team discovered that sunitinib could block FLT3 receptors and provide a treatment for ALL, the team could patent it as a new use of known compound, specifically sanctioned by Mayo. Since sunitinib has other uses,  the claim would not pre-empt the natural law that blocking ALL FLT3 receptors can inhibit the cancer. But what about the work that was required to correlate the mutation in the FLT3 gene with its overactivation and the fact that it was “driving the growth of his leukemia?” Such a claim might be written:

1) A method of diagnosing ALL associated with FLT3 receptor overexpression comprising:

(a) providing the sequence of RNA encoding a ALL patient’s FLT3 receptor in a leukemic marrow cell from said patient;

(b) providing the sequence of RNA encoding an FLT3 receptor in a normal bone marrow cell [or in a cell from a normal tissue of the patient];

(c) identifying mutations in the RNA sequence of step (a) that cause overexpression of the FLT3 receptor; and

(d) concluding that the patient is afflicted with ALL associated with said overexpression.

2) The method of claim 1 wherein the mutations occur in the TR region of the receptor.

Of course, these claims assume that he team discovered that some ALL patients overexpress the receptor and some don’t. These claims are a little more detailed that the Myriad cancer predisposition diagnosis claim, since they recite the effect of the mutations, e.g., the correlation between the mutations and the effect, at least functionally. It also is a claim that may not be necessary if there are simpler ways to determine if a patient’s leukemic cells are overexpressing the receptor – e.g., by using an anti-receptor antibody binding assay of some sort. Then observe how simple the claim becomes:

3) A method for diagnosing ALL associated with FLT3 overexpression comprising:

a) determining whether or not the concentration of FLT3 receptors on a subject’s leukemic bone marrow cells is elevated above that present on normal human marrow cells [or on normal marrow cells from the subject, if there are any]; and

b) if said level is elevated by x%, concluding that the patient is afflicted with ALL.

4) The method of claim 3 wherein the elevation of FLT3 receptors comprising a mutation in region TR [that is specific for ALL] is determined.

The feature of claim 2 may be needed, since the receptor level may also be elevated in other leukemias.

But have I just wasted an hour or so writing claims that fail the Mayo/Myriad rules and the new PTO Guidelines? (See previous post.) These are indeed method claims that contain a natural principle/correlation that is central to the claim and apply it to practical effect. In fact, claim 1 recites two such principles – the correlation between the mutation and the overexpression and between the overexpression and ALL. But we are not finished, since the claim must amount to “significantly more than the natural principle itself.”

The inquiry gets more cloudy, since the cancer predisposition diagnosis claim in Myriad was invalidated, a la Bilski, as an abstract idea, not as an attempt to monopolize a natural law. Does this mean that a diagnosis claim could be patent-ineligible for both violations? Possibly, but I wrote these claims to avoid the maxim that a method  that can be entirely carried out mentally is patent-ineligible. No one’s mental processes “provided” the RNA sequences in claim 1 and no one’s mind measured the receptor levels in claim 3.

To get back to Mayo and the July 3rd PTO guidelines, the fate of these claims looks bleak. The guidelines state: “Elements or steps that are well-understood, purely conventional, and routinely taken by others in order to apply the natural principle, or that only limit the use to a particular technological environment (field-of-use), would not be sufficiently specific. See Mayo at 1968.” So even a claim directed to diagnosing a particular subset of patients afflicted with a single type of cancer -ALL-would not be specific enough, since the claims still depend on a natural principle.

But hold on. These claims do not cover “every substantial practical application in that field”. Remember, the principle is overexpression of the receptor in a subset of ALL patients. Some degree of overexpression was known to occur in other types of leukemia. Perhaps the claims fall into the ill-described safe harbor: “A particular transformation recited in more than general terms may be sufficient to limit application to just one of several possible changes in state, such that the claim does not cover every substantial practical application of the natural principle.” Claim 3 recites a transformation. I am not so sure about claim 1, unless it positively recites the sequencing, but I certainly do not concede that the comparing step can be done without a supercomputer – but that may depend on the size of the RNA sequences.

The PTO Guidelines admit that they are not “comprehensive.”  However, we could have at least expected the PTO Guidelines to have provided more guidance, particularly in the “genetic gamble” of personalized medicine.