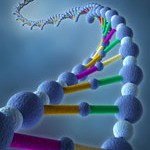 On December 20th, a panel of the Fed. Cir. of Judges Dyk, Clevinger and Prost – Dyk writing – found that six claims in Myriad’s dwindling arsenal of BRACA1 and 2 patents were invalid as claiming non-statutory subject matter. (University of Utah Res. Foundation et al. v. Ambry Genetics Corp., Appeal No. 2014-1361, -1366 (Fed. Cir., Dec. 20, 2014)). (A copy of the decision is found at the end of this post.) The decision makes more sense than some commentators have given it credit for, but it still reads like the plot of the last Matrix installment.

First, the panel invalidated four composition of matter claims directed to ssDNA segments useful to amplify the BRACA genes or portions thereof, when used as PCR primers, or to identify specific areas of the genes if used as probes. These were claims in US Pat. Nos. 5,747,282 and 5,837,492.

What is surprising is not that the panel found the claims invalid under Myriad – after all, the primers correspond to isolated portions of genomic DNA – the panel simply noted that “[t]hey are structurally identical to the ends of DNA strands found in nature.” What is surprising is the panel’s unabashed reading of Myriad as denying the patent eligibility of any isolated natural product:

However, while this expands the language Judge Dyk used in Roslin to bury Dolly [“Any existing organism…is not patentable.”], it is not what the Supreme Court held in Myriad. That decision was explicitly limited to genomic DNA and fragments thereof. This opinion expressly repudiates Bergy II and endorses the March 4th PTO “Life Sciences” Guidelines that were based on Mr. Hirschfeld’s opinion that the Supreme Court had never allowed a claim to a nature-based product that was not structurally changed from its “natural state.”

It is beyond ironic that, just days ago, the PTO backed off its position taken in the original “Life Sciences” Examination Guidelines that a structural change was necessary for an isolated nature based product to pass s. 101, and conceded that function must be considered in determining if the claimed product is markedly different from its natural state.

Myriad argued in vain that the primers are functionally different once isolated from the remainder of the genome. The panel’s rationale for ignoring the argument that the primers “serve as a starting material for [PCR]” is hard to follow, perhaps because it is on a Mobius strip:

So the panel simply concludes that the primers are not functionally different than a genomic DNA sequence containing the same sequence. But, of course, primers are not functioning in terms of data storage and transmittal as were the natural genes in Myriad. They are functioning, as the panel seems to recognize, as starting materials in a more complex process that amplifies a target stretch of DNA. This function was new enough to merit the Nobel Prize. Oh, but you already know that.

The method claims fell before the Mayo two-step test that the Supreme Court used in Alice Bank. Claims 7 and 8 of U.S. Pat. No. 5,753,441 were sitting ducks – they were directed to methods for screening the germline of a subject for an alteration of a BRACA1 gene by comparing the wild-type sequence to the subject’s sequence using a BRACA1 gene probe or by using PCR/sequencing.

But while Ambry argued that the claims of the ‘441 patent should be invalidated as an attempt to claim a natural phenomenon, the panel endorsed the earlier opinions of the Fed. Cir. that had upheld the validity of the isolated genes in the Myriad litigation, but had invalidated “comparison” method claim 1 of U.S. Pat. No. 6,033,857 as directed to an abstract idea.

Using the Mayo analysis, the panel simply identified the comparing step(s) as an abstract idea and then found that the use of probing or PCR/sequencing techniques did not add the necessary “inventive concept” or “significantly more” required by Mayo/Alice. Thus, the panel was both able to distance itself from the facts of Mayo – a Fed. Cir. decision reversed by the Supreme Court – while endorsing the Mayo two-step analysis applied by the Supreme Court in Alice.

Two faint rays of legal hope remain for diagnostic claims. One is that the method claims invalidated in this decision did not recite arriving at a diagnostic conclusion. Invalidated claims 7 and 8 depended from claim 1 of the ‘441 patent. While the original Myriad panel invalidated claim 2 of the ‘857 patent that further recited identifying a predisposition to develop cancer, that claim was not considered here. (See F.3d at 1303).

The second glimmer of hope is the panel’s discussion of Judge Bryson’s concurrence in part in the second Fed. Cir. Myriad opinion (689 F.3d at 1349) in which he endorsed the patentability of some of the claims as applications of the sequences that Myriad had discovered. Judge Bryson’s opinion was discussed with approval by the Supreme Court, but the current panel noted that the method claim that he used as an example was not before the Fed. Cir. and was more specific, reciting specific mutations in the BRACA1 gene discovered by Myriad.