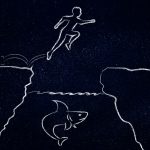 Nike sued Puma for infringing its fly knit shoes.  Puma filed a motion to dismiss because the patents asserted by Nike are directed to an abstract idea.  As can be seen below, the Nike claims clearly are directed to a SHOE!!!!  The judge in the case denied Puma’s motion this week.  A bit of sanity in a patent world gone mad.