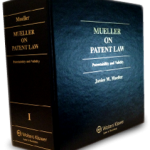 This is a guest post from the Chisum Patent Academy.

The Academy is pleased to announce the September 2018 publication by Wolters Kluwer Law & Business of the annual Update for Volume I (Patentability and Validity) of the practitioner treatise, Mueller on Patent Law, authored by our co-founder, Janice M. Mueller. See below to review the Highlights.

The full text of both volumes, including the 2018 Update for Volume I (Patentability and Validity), is available electronically on Wolters Kluwer’s CHEETAH legal research platform.

To review the detailed table of contents incorporating the 2018 Update for Volume I (Patentability and Validity), click here.

Highlights of the September 2018 Annual Update (Patentability and Validity):

In 2019, the Chisum Patent Academy will offer two small-group seminars:

Our small group seminars always include topics that are timely and important to professionals engaged in patent prosecution, litigation, counseling, and licensing. We update our syllabus for each seminar to include latest developments and trends. We’ll kick off each seminar with a morning review of the latest “blockbuster” Supreme Court and en banc Federal Circuit decisions. Other topics will be determined as we draw nearer to the seminar dates, and we will keep you informed about those. Past seminar syllabi are here.

The small group format of the seminars led by treatise authors Donald Chisum and Janice Mueller allows an in-depth exploration of the implications of these decisions for patent prosecution, PTO post-issue proceedings, patent portfolio evaluation, counseling, licensing, and litigation.

For more information and registration, please visit our website or email info@chisum.com